A Tele-Lecture with Shaykh ‘Abd al-Qādir al-Junayd on the importance of seeking knowledge and acting upon it, in conjunction with Salafi Daʿwah Cotabato, conducted on May 05, 2018, C.E corresponding to Shaʿbān 19, 1439H.

The translation of the lecture was read by Abū ‘Imrān Aḥmad Mababaya.

Transcript of the translation:

❝O noble brothers May Allāh سبحانه وتعالى beautify you with Fiqh in His religion and His Law.

From the greatest type of ʿIbādah (worship), the most dignified of obedience, and best way to draw nearer to Allāh سبحانه وتعالى, which all of must strive to be from its people and strive in increasing our efforts in performing it and be from those who continue upon it until our deeds are cut off and our soul separates from this Dunyā. It is the ʿIbādah of seeking knowledge of the Sharīʿʿah. The knowledge which is built upon what Allāh سبحانه وتعالى said, what His Messenger ﷺ said, and what the Ṣaḥābah – May Allāh be pleased with them – said; understanding it, studying it, and constantly reviewing it.

It was authentically reported from Imām az-Zuhrī رحمه الله said, and he is from the great Tabiʿī, he said:

Allāh is not worshipped in any way better than with Fiqh (understanding of the religion).

Meaning, whoever wants to worship Allāh سبحانه وتعالى in an honorable and great way, let him worship Him with Fiqh (understanding) in His religion and law. It is achieved by way of listening to the explanations of the people of knowledge and reading their books and attending their lessons and taking (knowledge) from them.

Whoever Allāh wants good for, He gives him the understanding of the Dīn.

Meaning, whoever Allāh wants good for a slave in this world and hereafter from among His slaves, then he makes him from His slaves who are Fuqahāʿ, who understand the religion of their Lord and understand its rulings.

As for the one whom Allāh doesn’t wish good for, Allāh won’t give him the Tawfīq (success) to possess it, rather he would be far away from knowledge, he would attain misguidance and he might increase in his misguidance, such that he would be from the losers.

The Salaf aṣ-Ṣaliḥ deemed that spending your time in seeking knowledge is better than spending it on other acts of worship from those that are optional and highly recommended.

A portion of knowledge is more beloved to me than a portion of (voluntary) worship.

Why? Because knowledge itself is ʿIbādah. When you attend the lesson and listen to it, or you read a book, then you are upon ʿIbādah. This is the first point.

Likewise, by way of knowledge, it increases you immensely in rewards, because it makes you from the people who are upon sure knowledge (or insight) and guidance from Allāh سبحانه وتعالى.

It was authentically reported from the Prophet ﷺ said:

Whoever directs someone to a good, then he will have the reward equal to those who follow him without their reward being diminished in any way.

By way of knowledge, you would be able to enjoin the good and forbid the evil in a correct manner. If you see a man beside you praying wrongly which opposes the Sharīʿah, you would inform him in a gentle way and you would mention to him the proofs, then Allāh will reward you for enjoining good and forbidding evil and for correcting the ʿIbādah of your brother. These affairs could not be achieved except by way of ʿIlm ash-Sharʿī. And knowledge is not attained unless one strives to gain it.

Allāh will exalt in degree those of you who believe, and those who have been granted knowledge.

Likewise, it has been established by the Prophet ﷺ:

Contemplate and look at the moon when it becomes full and compare it to the stars. Which is greater and better? You would know that it is the moon.

That’s why the Prophet ﷺ said:

Because the scholar possesses both characteristics; he is knowledgeable and a worshipper who worships Allāh upon insight. As for the worshipper, then he is only limited to ʿIbādah, and perhaps there may be mistakes in his ʿIbādah due to him not seeking knowledge.

It is only those who have knowledge among His slaves that fear Allāh.

Meaning the ʿUlamaʾ (scholars) are the one who fears Allāh سبحانه وتعالى the most.

It was also authentically reported that the Prophet ﷺ said:

By Allāh, I hope that I am the most fearful of you with respect to Allāh and the most knowledgeable of you in how I have Taqwá.

The Prophet ﷺ is the most fearful of Allāh than us because he is more knowledgeable than us with regards to the Dīn of Allāh and His law.

It was established that Imām Sufyān ath-Thawrī رحمه الله said:

Why is knowledge favored to others? Because it blesses the slave to attain the fear of Allāh. Whoever wants to attain Jannah and enjoy it with the best enjoyment, then seeking knowledge is a means for that.

It was authentically reported that the Prophet ﷺ said:

Whoever goes down a path searching for knowledge, Allāh will make it easy for him the path to Paradise.

The angels lower their wings being pleased with the one who seeks knowledge – and the seeker of knowledge – everyone seeks forgiveness for him from the heavens and the earth, even the fish in an ocean.

How delightful is it for the seeker of knowledge and how great is their status! This is the status of knowledge, those who are in the heavens and the earth, even the fishes in the sea seek forgiveness for him from Allāh سبحانه وتعالى.

If you sit and ask anyone from the Muslim regarding the ruling of the Dīn, you will find that a lot of issues are not known to him even if he has attained a high degree in the various arts or is one of the most intelligent of the people. If you ask him regarding Islamic rulings, you would find that he couldn’t answer you correctly. Why? Because he hasn’t sought knowledge which would draw them closer to Allāh سبحانه وتعالى and correct their religion. Rather most of them go to students of knowledge who are younger in age and they ask him about the issue of a particular person.

Easiness in seeking knowledge and due to few people having Fiqh (understanding in it) and huge people turning away from it, this is from the sign of the Hour, from the signs that the Day of Judgment is close.

It was authentically reported that the Prophet ﷺ said:

From the signs of the Hour is the disappearance of knowledge and manifestation of ignorance.

It was also authentically reported that the Prophet ﷺ also said:

Verily, Allāh does not take away knowledge by snatching it from the people, but He takes it away by taking away (the lives of) the scholars until none of the scholars remains alive. Then the people will take ignorant ones as their leaders, who, when asked to deliver religious verdicts, will issue them without knowledge, the result being that they will go astray and will lead others astray.

This is the situation we live in now, and those who live after us could witness more severe than this.

A few years back, we had a lot of Kibār al-ʿUlamaʾ (major scholars), from those who were well-grounded in knowledge, then they decreased one by one due to their death, May Allāh have mercy upon them. To the extent in one year, a number of them (many) of them passed away. It reached the point that the scholars who are well-grounded now do not exceed the number of fingers one has in one hand for the Ummah that is large in number.

One must strive to seek knowledge and be diligent in learning and revising it and have a huge desire to attain it and always ask Allāh سبحانه وتعالى to help us in seeking it. One must not seek knowledge so that he can be called a student of knowledge, rather our intention must be that we could act upon it.

It was established that Imām Sufyān ath-Thawrī رحمه الله said:

Beautify knowledge with yourself, and do not beautify yourself with knowledge.

Beautify knowledge with yourself, meaning by acting upon it, which would have an effect in your ʿIbādah, in your dealings, in your manners, in your advice, and in every situation.

It has been reported from Abū Qilābah رحمه الله, one of the Tabiʿī who said to one of his students:

If Allāh سبحانه وتعالى increases you in knowledge - You know an issue or two issues about the religion and you know its proofs and rulings - then increase in your ʿIbādah to Him.

And you shouldn’t concern yourself with the statements of the people (regarding you).

Abstinence from knowledge is from the dangerous thing for a student of knowledge. Allāh سبحانه said:

Enjoin you Al-Birr (piety and righteousness and each and every act of obedience to Allāh) on the people and you forget (to practice it) yourselves, while you recite the Scripture! Have you then no sense?

It was established that Ibn Masʿūd رضي الله عنه said:

I fear the day when the caller will call and say “O ʿUwaymir”, and I would say “Here I am at your Service My Lord Here I am at your service”. Then He will say “Did you not learn?” I will say “Yes” He will say “What have you done with what you have learned?” Then every verse from the Book of Allāh سبحانه وتعالى which contains the prohibitions and the commandments will come and will ask me about its obligation. Then the commandments will be a witness against me that I haven’t acted upon it, and the prohibition will be a witness against me that I haven’t left or abstained from it. So, I seek refuge with Allāh from the heart which doesn’t fear, and from the action which doesn’t benefit, and from the call that is not heard, and I seek refuge with Allah from the Duʿāʾ which is not answered.

Al-Ḥāfidh al-Khaṭīb al-Baghdādī رحمه الله - narrates to us the condition of the Salaf with regards to knowledge - said:

Has it not reached you (regarding) the Salaf, who have passed, how the lofty degrees (they achieved) except with sincerity in belief, the righteous deeds, and prevailing asceticism from all the elegance of the world?

It has been narrated to us how the Salaf aṣ-Ṣāliḥ excelled over us as an example in terms of knowledge and action.

It has been reported from Abū ʿAbdurraḥmān as-Sulamī رحمه الله who said:

There has not reached a single ḥadīth to me from the Messenger of ﷺ Allāh except that I have acted upon it even a single time.

We used to seek aid in memorization of the ḥadīth by acting upon it.

Those who excelled in knowledge amongst the people manage to excel over them in action.

I ask Allāh to benefit me and you from what you have heard and make us from those who listen to the statement and follow it and bestow upon us with understanding in His religion in this world, seeking it, and learning it until we meet Him and He is pleased with us.

Tweeter
Previous Post Types of Fitnah and the position of Muslims on it - Shaykh ʿAbdullāh aẓ-Ẓāfirī
Next Post Explanation of the ḥadīth: Do not exaggerate in praising me - Shaykh Sālim Bāmiḥriz 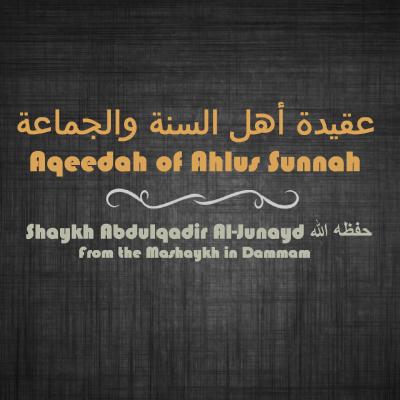 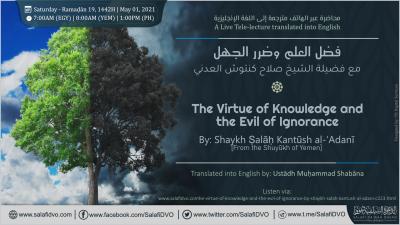